I'd like to start blogging more regularly and with more focus, so i've completed the switcheroo! I'm still getting comfy over there, but i've imported my old entries for your reading pleasure. =)

http://livinglearninglovingandgrowing.wordpress.com/
Posted by Manda at 7:45 PM 0 stopped by to say hi

In case you hadn't heard, yesterday morning a chipmunk pushed the screen out of a corner of our screen door and broke into the house as I was getting ready for work. After chasing him around, he hid so good I couldn't find him. After standing on the living room table throwing remotes and anything else within reach at every piece of furniture, trying to get him to run out so I could throw my ice cream bucket on him, I finally had to leave for work and to take chloe to the babysitters. I hated to leave him in the house, but I should have allready left for work, so it was time to go. Fortunately, he was still there waiting when Jeremy got home. Jeremy chased him around for a while, but when I got home from work he had to leave to donate blood, so Chloe and I decided to set a trap….
First off, we found an old aquarium in the basement, and used the ole stick-rope deal. Chloe so kindly prepared a chipmunk feast of peanut butter, sunflower seeds, and even a dish of water.
Secondly, she tested the trap. It seemed to work.
She then stood, watching and waiting for 'chippy', as she had so affectionately nicknamed him, to come out of hiding and feast on her delicacies. That lasted…. About 30 seconds and she got bored. So I tied string to nearby doorknob and checped every few minutes for chippy.
Daddy got home, and decided that desperate times call for desperate measures, and flipped the couch, where he thought Chippy was hiding...
Sure enough, he ran out! Since his couch hiding place was no longer an option, chippy decided to travel through the baseboards.
Daddy set a 'giraffe' decoy to lure out chippy. Chloe threw a fit at the unappropriate use of mr giraffe. Daddy quickly flipped bucket onto chippy. currently, Chippy is under said bucket, and bucket is running around living room. (Please pay no attention to the filthy was-under-the-couch-til-it-got-exposed floor!)
Let me pause to explain what happened next, because unfortunately, no pictures were taken. Chippy was dumped into aquarium with a large heavy mirror placed on top. Marc removed mirror so Chippy could finish his photo shoot, and Chippy jumped out of aquarium and ran down hall to bathroom. We'll now continue our saga….
Chippy took quite the bathroom tour
He tried to brush his teeth, but from what I heard from the other side of the door, (you know there's no way I was being locked in the bathroom with the varmin, so photo credit goes to marc) chloe threw a fit over chippy touching her toothpaste, after he tried to chew it open.
He then caught a whiff of st. maarten as he enjoyed our seashell collection….
But due to chloe's wails about him touching her seashells, I'm sure, he scaled the wall.
He realized he'd been very naughty and had gotten into lots of things and should at least wash up…
As he contemplated his next move…..
I really can't say what went wrong at this point. Basically, Chippy escaped the bathroom, even with 3 people in there making sure he didn't. He was quite clever, you see. He then proceeded to run into the craft room. Daddy and Marc quickly followed, with chloe not far behind. Marc used a paper bag as his weapon of choice, and someone valiantly scooped chippy out of a mid-air-hop right into the bag! We then took the bag outside, and chloe opened it and dumped him out. Here is chippy running/hopping like the wind…. I'M FREEEEEEEEEEEE he shouted! (Not really, but I imagine it's what he was thinking!)
We sincerely hope he doesn't visit again, but if he does……. It was certainly an adventure we won't forget!!!
Posted by Manda at 6:55 AM 0 stopped by to say hi 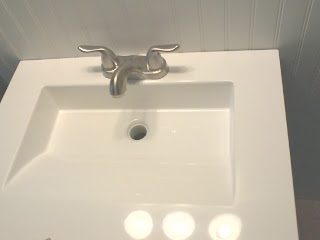 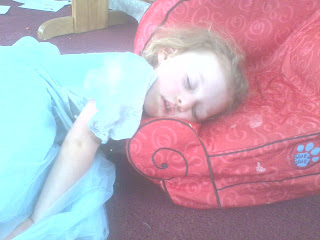 10 years ago, I was a bratty little 8th grader. The "I can be your friend" Veggie tales song comes to mind.... "Have you ever seen a boy with funny clothes, a girl with braces on her teeth or freckles on her nose? If they added something about hair in these 'princess laia-esque' big poofy pigtails, that woulda been me. I really thought I looked cool, for some reason, with the bottom half of my pants so big, my now-3-year-old would gladly have used them as the best hiding spot EVER. I seriously wish I had a picture to post right now but really..... remember jnco jeans people?!?! feather lined hoods on fleeces? not fur, feathers people! and pink ones at that! I had the BEST best friend ever, Jessica J, and some other amazing friends.... Amber, my roller skating buddy, Liz & Renee, my partners in crime....and then this guy. This guy that dated all the other girls, even asked my advice about them, who just called me his 'best buddy', and couldn't see that I had the biggest crush in the WORLD on him...... ahhh the good ole' days. =) Then, 10 years ago today, Jeremy asked me to be his girlfriend and my life changed forever.

He taught me to share, and what it was like to care for another person more than yourself, for the first time in my life. He challenged me constantly to be a better person, not to swear so much, not to argue with my parents. Every spare penny he earned he spent on me. I was at a really critical point in my life, in a stage where I was really rebelling after my parents moved our family from Michigan to Illinois. I quit doing my school work, unless it seemed like something interesting. I got bad grades, intentionally. I got detentions for being late to class all the time, and whenever a friend would get a detention for being late, we'd spread the word and a few of us would get detention so we didn't have to go it alone. Never Jeremy though. He stood his ground and was always on time to class. Sometimes people say he changed after he met me, like it's a good thing, but I don't think people noticed so much exactly how much I changed for the better, just having him play such an important role in my life. Most importantly, he challenged my faith. He asked questions that made me think. Over the next several years I would grow spiritually because of him, and if I hadn't met him, I really wonder where I'd be today...

Reminds me of another song, 'I will never be, the same again. I can never return, I've closed the door.' I'm so glad I walked out that door and into a life with you. =)

What I'm here for

This morning I got a daily email from Proverbs 31 Ministries, I read them if I have time, and when I do they are such a blessing.... I finished this mornings, and started to pray, "Lord, make these problems go away".... how quickly I had forgotten what I just read. My prayer almost immediately changed to, "Lord, thank you for this, I know it will grow me, may your will be done". Thank you Lord, for a great reminder!
Posted by Manda at 10:59 AM 0 stopped by to say hi

I am so thankful they're airing this! As most of you know, I had Post Partum Cardiomyopathy after having my little one, and be aware that it can happen with NONE of these issues happening during pregnancy, it can just HAPPEN right afterwards, sometimes a day or week later, sometimes up to 6 months later!
Posted by Manda at 12:22 PM 1 stopped by to say hi

Manda
Michigan
I'm Amanda... I am a mother, a wife, a sister, a daughter, and a PPCM survivor. Most importantly, I am a daughter of the King of Kings! These are my day to day happenings, ideas, thoughts, ramblings, and... well who knows what will show up?